At the time of writing this, I’ve gone on and read Raintown, Licenced To Kill, and Code of Honour, but of the eight episodes I’ve covered, Nemo is my favourite. As it starts we’re dropped right in the middle of the action. Kal is being pursued by assailants he’s yet to even lay eyes upon. If that doesn’t put forward the urgency of the situation, that Kal Jerico – a man competent of taking on small underhive gangs by himself – is second-guessing hails of shots, running like the plague’s behind him and isn’t even able to pull off a clean shot – then when he does catch a glimpse of his assailants, you should have an inkling.
Spyrers. “Uphive bounty hunters. The worst kind of expert killers.” There’s another reason I love this episode. The first half of it is Kal madly running for his life. The narration in this segment is delivered completely by way of thought, and it’s top-notch, and remains top-notch throughout. Oh, and yet again Karl Kopinski is to be highly praised for his artwork. His renditions of Necromundans are better than the miniatures Games Workshop themselves produced. But I never really disliked most of the miniatures. Spyrers, however, always looked clunky and outdated no matter their house of origin, which was not complemented by their horrible colour choices. Don’t get me wrong, I like the flavour text about them, but if the specialist games were still updated they could've given the Spyrers a Dark-Eldar-like makeover. Karl Kopinski’s agents of house Orrus and house Malcadon are perfect, and by far some of my favourite art-pieces within the Kal Jerico comics. 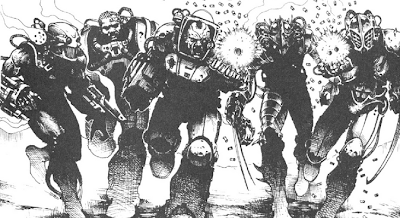 Despite making a brave dash for freedom, and even killing one of the Malcadon Spyrers, Kal is caught off-guard by one of the Orrus bounty hunters crashing through a wall, which in a hail of darts joins Kal to the nearest flat surface (another wall). Just as you’re left wondering what’s going to happen next, the Spyrers themselves are bushwhacked. Surrounded and horribly outgunned by Delaque gangers, and with one of their number reduced to slag before them, even the combat-hardened Spyrers are open to parley.
Cheka – a ganger who speaks on behalf of the gang leader Nemo – tells the Spyrers their previous contracts are null and to go about their business. The undercurrent of the conversation implies that if the Spyrers hadn't be willing to surrender, the very mention of Nemo has deterred them, and even if they had been willing, it acted as incentive. The Spyrers are allowed to leave, and Kal and Cheka catch up like only old enemies know how. Kal gets roughed up in a way certain to happen in every part of the dollars trilogy. Bloodied, Kal puts aside “pleasantries” with some deductive work. He tells Cheka that if Nemo had wanted him dead then he wouldn’t have gone to such lengths. We find out that usually saying his name warrants a death sentence. Given his predicament, however, Kal is willing to take chances. And then enters Nemo.

““Nemo the Faceless. Nemo the Secrets-Gatherer. Spymaster of Hive Primus and, it is rumoured, agent of the Inquisition.”” And his design is hands down the coolest, most stylish character drawn in the comic series I’ve seen so far! He exudes bad-assery. What we have here is perhaps the most fleshed-out character we have in the whole of Kal Jerico.
Kal is questioning of his motives, and Nemo is ready to answer, albeit vaguely. He makes it clear that he could’ve killed him, and that Kal Jerico now owes him a debt; when Nemo wishes to use Kal as his pawn, so it will be. And then he exits and the episode leaves off on a melancholy tone, which is slightly out of the norm for Kal Jerico.
So here we have a brilliant story, which in essence exists to set up a villain, and the possibility of another story. And, wow, my mind goes giddy at the prospects of subterfuge that could be playing in the background here. I wouldn’t put it passed a villain like Nemo having hired Spyrers to chase down Kal and corner him just to make an example. His build-up, his entrance and his exit are all simply amazing, and he ekes the prospect of more good stories to come just by him turning up. I hope the author(s) don’t cock this one up.
Nemo as a story gets an 8.5 out of 10. Yet again, in similarity Nemo himself gets an 8.5 out of 10.

Now we go from the good to cheesy. Not cheesy as in bad, maybe a guilty pleasure at worst, but it is flawed and requires a pinch of salt. Redemption showcases the Redemptionist Cult. They get more screen-time in their 5 page episode than any of the other gang thus far. Basically the whole story is easily summarised as Scabbs gets kidnapped by Cardinal Crimson’s Redemptionists and Kal Jerico makes a awesome rescue, with all the planning and foolishness of Jack Sparrow. This is definitely the story where that side of his personality shows through more prominently.

So Cardinal Crimson’s band of religious zealots has been undergoing their heretic-nabbing sessions in the underhive. They’ve captured a bountiful amount, and amongst them is Scabbs. The Cardinal sees this as an opportunity to pontificate to his congregation, and heretics are thrown into the fires as he preaches. The Cardinal’s fall is he gets too carried away in his pontificating. Kal Jerico swings in like a true swashbuckler, kicks the Cardinal into the fires and unties Scabbs and the two make their improvised escape. Action. Explosions. Shooting. Exit.
We then find out the Cardinal survived in a Joker/Two-Face turn of fate, and he now in his burnt form has decried Kal Jerico as the utmost heretic. Because he’s Westborough Baptist Church leader material given a gun and lackeys.

To the credit of the story it has two strong-points. One: Kal takes a fall during the escape, and Scabbs is there to hoist him to safety. This is the first instance we see Scabbs as a useful accomplice as he’s under fire when he does so. Two: Redemptionist cults are the kind of religious zealots found at the heart of 40k humanity. Pro-Imperial nut-jobs taking things to the extreme. But it’s how the story handles them. Given the cheese that oft sneaks into Kal Jerico, it’s quite entertaining to read the Cardinal’s sermons, and it feels all too fitting of the genre how he returns, even if still cheesy. This is how comic book 40k Emperor-worshippers are okay to be portrayed, and not like they are in the abysmal Redeemer comic series (which I've read a few of by now). But I’ll have more about that to ramble about later, when Kal Jerico and The Redeemer start accumulating similarities properly.
The con of the story is it feels like it would have been a better origin story for Cardinal Crimson if we’d already seen him as a villain before.
Redemption scores 6.5 out of 10. Cardinal Crimson scores a 6.5 out of 10 too (I swear I’ll start diverging the scores for villains and their stories again).

Next up on the autopsy table is the four-part episode, Motherlode.