So here are the first story reviews proper, The Hit & Yolanda. The Hit is the first of the line of Kal Jerico comics, and Yolanda is chronologically after. Likewise this is the way I’ll be tackling them – Chronologically.

Kal Jerico is informed by Scabbs that a high price has been put on his head. Characteristically Kal seems unperturbed, and why? Kal is the man with the plan. The setting of this venture takes place inside of, and just outside of the Sump Hole – a den of local miscreants and underhivers. As is standard of Karl Kopinski’s artistic skills, the frames are crammed with detail, and while it takes a careful eye to absorb all of the surroundings, more immediately in sight we have all sorts of deviants. I was joyed to see an Escher ganger amongst them. Anyway, without getting distracted here, it isn’t long before Kal’s high bounty attracts some claimants. And here is where we have the first of our Necromunda gangs featured: Pit Slaves, oozing with thuggish menace, and covered in bionic replacements and implanted weaponry.
No matter their three-to-one advantage, Kal quickly dispatches them, and through some awkward transitional dialogue explains that he in fact was the one to plant a bounty on his own head to bring out the notorious Vandal Feg, who has a much larger bounty than his.

Now as far as villains go Vandal is only really a bigger, more bionically enhanced version of the thugs that he sent to flush out Kal. It’s similar to thwarting mobs of thugs in the Arkham games only to have to confront a Titan-enhanced thug. Standard miniboss formula, but I’ll be damned if it doesn't work. I mean it’s cliché and all but it allows Kal to explain his rather well thought-out scheme and then use his cunning and reflexes to disarm Vandal and subdue him. Also, it’s the fast versus strong mash up. Kal has to use Vandal’s weight against him on top of trick shots and sword-swipes to disable his armaments.

I suppose there’s only one flaw to this story. It feels too much like a pilot, even going so far as to play the ending safe in the case it either succeeds or fails. It’s practically on the verge of saying, ‘And Kal lived happily ever after’. But don’t get me wrong, this is a minor setback, and it’s still able to portray its slightly cheesy wordplay and subtle cleverness while setting up three important characters, and all within the five-page limit of a Warhammer monthly comic.
In conclusion, I give The Hit a 6.5 out of 10 rating as a story, and Vandal Feg a 7 out of 10 rating as a villain. Before I move onto the next review, “Helmawr’s Rump”? I know that Black Library like to keep their literature fairly clean of swears, but this is such a cheesy made up exclamation, and it doesn’t flow too well of the tongue either. Anyway, next up we have...

Kal awakens Scabbs from his own alcohol-induced somnia to share his most recent revelation. Two well-rewarded items of his interest share a rather striking similarity. “Outlands Annie”, leader of the Wildcats Escher gang, and noble-blooded “kidnap victim” Yolanda Catallus are one and the same. The venture starts in a bar similar to the one that featured a full half of the previous episode and Kal wit seems to have keened. The trio of the rather inspired one-liners he uses to describe Scabbs made me chuckle.
Before long the two have tracked down Yolanda and her gang in the underhive, and for the first time we’re gifted with some really awesome renderings of what the underhive looks like. Colossal columns and sewers contrast with the ruins of a long since dissolved civilisation. Indeed, it’s due to the completely unscathed supports and sanitisation systems that the wasteland of the slowly crumbling underhive is possible. After all, the rest of the hive has to remain upright and inhabited somehow. A sense of imposing awe and dread was conjured up by these ancient guardian structures and the dying architecture it had once shielded.

Kal approaches the Wildcats from afar and has Scabbs remain hidden to cover his back. He propositions Yolanda to come quietly whilst covering himself in the event of a decline by popping an undetected frag into the campfire nearby. Yolanda’s Escher response is as we’d expect, she’d rather drop dead than bow to a man. As the Escher gangers surround Kal, his grenade goes off, he delivers the knock-out punch to Yolanda and makes a hasty escape in the confusion.
Yolanda almost feels a little too atypical of her apunkalyptic character. She at least feels as an Escher ganger should, but what gives her a boost to her likeability is her anger at being captured. The threats she delivers to Kal are beyond entertaining to read. The whole sewer sequence brings out most of this story. We find out Scabbs is half-Ratskin upon entering and as such is well travelled in these parts, bringing out more of his usefulness. It’s also at this point that Kal realises that bringing Yolanda home would probably do more harm than good, and a scarred reputation would make House Catallus less likely to pay their hefty reward. On a whim, Kal decides that he’s sort of fond of Yolanda, and holding Scabbs back from executing her, leaves her to attempt her own escape. The two walk off merrily into the sewerset and leave Yolanda a little incentive to untie herself a little quicker. 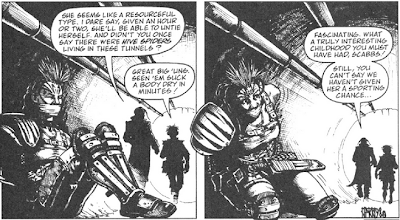 Tune in next time for reviews of Nemo and Redemption.