Thoughts on Wayne Reynolds (including Raintown)

When I’d ordered The Complete Kal Jerico I’d only been taken as far as the fifth episode of the namesake character. I’d indulged in the brilliant artwork of Mister Karl Kopinski. So it was much to my shock when I opened up the book-thicker-than-a-bible to see the artist changes after Motherlode. I skimmed over the next few episodes (skimmed literally, I only read them later). I’d once commented that Karl’s art was of a finer calibre than even the best of the Necromunda range of miniatures. Wayne Reynolds isn’t; as a matter of fact it’s worse. But I’d been crucially missing context. Just because the art was cartoonier didn’t mean the stories were worse. Even more importantly, it’s easy to miss how the pictures flow without reading the story through. Karl’s art seems disjointed without narration.
Baring these things in mind I began my read-through of the Wayne Reynolds episodes. At current I finished The Delivery just before starting this review. It’s hard not to be able to squeeze in a five-page comic after-all.
I’m pleased to say that Wayne Reynolds isn’t a bad artist. Not by a long short. Sure, he’s not excellence, being my biased opinion of Karl Kopinski. At his best he can maintain a wonderful sense of movement or pull in a strong atmosphere. He favours an angular style of character. This kind-of reminds me of the Dreamworks movies The Prince of Egypt & The Road to El Dorado. As a matter of opinion, the style in which the main protagonists are drawn in these movies is a little similar to the way Reynolds draws Kal Jerico, albeit with a grimdark edge.

At worst Wayne Reynolds is something else. His cartoony style can sometimes work well with the absurdity of the situation, and by this I mean it brings it out pretty well. Deff Skwadron had a similar style. This can also be the problem. Kal Jerico works well as a slightly preposterous adventure series, but it’s kept interesting by its intelligent slant. When the absurd comes out it sometimes feels that Reynold’s art is juggling to making it enjoyable. Save that he isn’t a trained juggler. Therefore, sometimes it covers it well, and sometimes it only highlights the embarrassing writing.
Occurring patterns that I’ve noticed include these (these are the gripe-worthy): Cramming gang-level gunfights into a single frame like they belong on sixties comedy poster. Event-by-event frames to show the interesting & absurd that happens in a journey whilst cutting out all of the deep & intellectual. And Scalies.
I dislike the frame-crammed gunfights because they take away movement, time and space. Everybody ends up shooting each-other at point blank, and it serves only to transition quickly. You get none of the wonderfully fleshed-out battles of yester-issue. It’s naff. I dislike and like simultaneously the event-by-event frames. They are usually just flung in to show awesome things happening, and to over-spice the midsection. Sometimes there’s a wonderful reference or bit of comedy, maybe an integral plot element, but equally often I end up wondering why my freshly purchased hotdog has spices on it. But then we have Reynold’s Scalies, and my word where did the scalies go? They were established looks-wise before, and now we’re left with escapee Crazy Bones. They’re devoid of anything short of the laziest drawing that shouldn’t be in these comics. Reynolds is, after-all, capable of some brilliant little details in his frames. I’m left pondering why he did it. Luckily I’ve only seen one of these in Kal Jerico so far, but in Redeemer they’re like flipping rabbits!

But to highlight the good a little better, here’s my review of Raintown.

“The remote underhive settlement of Raintown, where the locals scavange a living from the rich mineral deposits created by the dumping of chemical wastes from the vast hive more than half a mile overhead! Life is hard in Raintown, and every scavenger’s dream is to strike it rich before they succumb to the poison air and pollution of the place. However, there is one thing here they fear more than anything – acid rain from the factories above, dumped without warning into the underhive.
“A good rule of thumb in Raintown is never to be more than twenty paces from the nearest hard cover. Not surprisingly, Raintown is a haven for wanted outlaws with a price on their head, because what bounty hunters would be desperate enough to follow their quarry to such a place?”
Unsurprisingly enter Kal Jerico and Scabbs. But phwoar, with good enough set up text like that you scarcely need art, but Reynolds still adds to it: the ramshackle slums, the downtrodden look of the inhabitants, the lone straggler melting slowly away as life and flesh meld into skeletal lifelessness. Even Kal and Scabbs entrance is quite nicely dramatic.

In this story they’re played more as enforcers of the law; a nice touch bearing in mind their profession. They’re asking after a pair of criminals who you can only see the names of briefly on their wanted poster in one frame, “Bucket Head Jaxxon” and “Plate McGrew”. They’re worth five hundred credits apiece, dead or alive. By now we start seeing the scale of prices and what amounts make it worthwhile doing what. Below I've included a list of what we've had so far in the way of bounties. Maybe this’ll be my new gimmick.

1. Yolanda Catallus – 5000 credits. Knowledge that she had become a famed criminal made it likely that House Catallus would be shamed and unlikely to pay reward for her rescue.
2. Kal Jerico – 1200 credits. A price high enough to bring out the greediest wanted criminal scum out of hiding to claim the reward of, and a worthwhile trade off for bringing in Vandal Feg.
3. “Outlands Annie” – 1000 credits. Affections made it that Kal dropped his claim on her.
4. Bucket Head Jaxxon & Plate McGrew – 500 credits each. Price just worth pursuing them both to the death-trap of Raintown.
5. Escaped pit slaves – 80 credits.

Now it is my opinion that any series that revolves around Bounty Hunter protagonists does well to tell us where there money is going. It’s incentive for the plot. It practically sets up situations and adds some small element of depth to the characters. Knowing by now that Kal is prone to blowing money on gambling, seeing him joke about coming quietly costing less in ammo expenditure was something a tad funny.
Anyway, just as Kal finishes asking for the wanted party they smash a bottle over his head and make a run for it into the pouring rain. Kal recovers and along with Scabbs they give chase, given due warning that even with chem-cloaks they will only last five minutes. What happens next is a game of cat and mouse. Kal and Scabbs split up, and use their smarts to wrangle the culprits. This is where Wayne Reynolds skills show up again – he draws a wonderful hunter & hunted situation. The rain restricts the field of vision, and Kal is forced into biding his time and dodging ambushes, using feedback of the last occasion to pinpoint his quarry. Moreover, he takes his time with the pacing of the action in this piece. 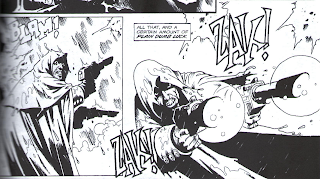 Finally, after a few minutes in the rain, Kal spies his prey under cover. With little time left he approaches quickly from behind only to find he’s been set up (I won’t tell how. It’s part of the fun). Kal narrowly avoids a scalping and in a desperate last measure kicks the attacking outlaw into the rain where the melts away unprotected. This entire sequence is rich with some brilliant tension-building and atmosphere. Kal is left to sit out the downpour; when it does end, Scabbs returns with the other mark.
It’s really unique to see Kal utterly fed up at the end of a story, and this is one of those melancholy endings. This story is such a simple idea, but it is so well drawn and so well told. I find it hard to conclude exactly why I like this episode so much, but it’s probably all explained above. Plus, it’s nice to see Scabbs developed to a point where Kal trusts him enough to go after bounties himself, and is capable of pulling it off. Raintown scores a well-deserved 8 out of 10, and highlights more of Wayne Reynolds pros than any other I've read this far.
Next time I’ll be covering Licenced to Kill and Code of Honour. ‘Til then!