Licenced to Kill & Code of Honour

Now we’re into Reynolds’ territory, and the stories have changed direction a little. Licenced to Kill and Code of Honour are as detached from setting up new villains as Raintown was. Well, I suppose we do get new characters, but none last particularly long. I do quite like the change in pace. Many of Kal’s previous stories were more his survival, or science-fantasy adventures. Now we have a few tales of a duo of bounty hunters seeking out bounties in the crooked edges of the underhive. Do the new stories hold up with Reynolds’ first, Raintown? Let’s find out.

Licenced to Kill starts with a very intriguing story, and delves deeper into the bounty hunting business on Necromunda. We pick up on the aftermath of one of Kal Jerico’s hunts as he and Scabbs collect their rewards for the Ash Bandits gang. Afterwards he’s confronted by a freshly instated Guilder Watchmen Gang led by one Oleg Kaspo. Kaspo informs Kal that his bounty hunter licence is null and void and to continue with his job he must pay a five-hundred credit fee, and he does so in the most Mafioso-takeover way possible, putting Kal under his “protection” and telling him if in five days he has not renewed his licence then there will be... trouble.
Kal being savvy to this corrupt group has a plan to counter them and so embarks on one long bender. Scabbs is left to do all of the ground work. 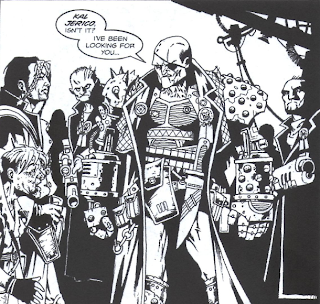 There are a couple of particularly nice things about this sequence. One is that we’re shown more of what Kal’s profession entails. The bounty collection courtroom filled with hunters awaiting their turn to collect. It’s always nice to be filled in more on the background. The next is that we have a gang not featured in Necromunda, and they look sleek and unlike the other factions. By now we have a strong supplement of what exactly the Necromundan guilders are like.
We then transition by use of many frames of day-to-day activity. The downside to this is Reynolds uses these to cram too much unneeded action in. It’s cool otherwise adding extra detail to the background, but do we need to see Scabbs outrunning spiders and leeches. It’s not even really comedic. We don’t need this chase movie formula thrown in. There’s something keeping me hooked to this story, and it’s not action or comedy at the moment.

Detective-work – as Wayne Reynolds started drawing these strips, Kal Jerico's character was developed into more of an agent of the law. Not an outright enforcer, but it is nice to see this private eye angle. In the story, Kal has now been willingly cornered by the Sump Hole by Oleg Kaspo and his gang. But there’s good reason Kal sent Scabbs on a fetch-quest. Scabbs has found out that Oleg Kaspo is an escaped pit slave, and his gang – outlaws, just as Kal had suspected.
Just before Kal’s time was up Scabbs had delivered this news. Furthermore, he’d been sent on to call in reinforcements, who all turn up. Matched almost man-to-man in number, the two sides fight a bloody gun battle to the end. The bounty hunters are better trained and for every bounty hunter down, two outlaws are felled. Despite the horrible crammed-frame gunfight the story feels it’s ready to round up. We’ve learned of new bounty hunters, each distinct but not with a name solidly connected to their personas. But right at the last second, Licenced to Kill pulls out a completely unrequired campy ending. After all the bloodshed and melancholy, the best way to decide how the bounty will be split is to have a MASSIVE FISTFIGHT! Well that was unexpected, and nonsensical. It kinda ruins the atmosphere of this mystery-thriller episode too.

All that said, Licenced to Kill is still quite enjoyable, all flaws included. It even has some great foreshadowing included in its atmospheric frames. Oleg Kaspo is menacing, even if his wide range of emotions goes from angry grimace to well, er... angry grimace. But he doesn’t need to do much else, and he looks like he’d be played suitably by Ray Stevenson. Which pretty much sums up that this is a villain that goes in-hand with the background, and very well too. I give Licenced to Kill 6.5 out of 10. I’m hoping we’ll find out the names of some of the other bounty hunters to appear in this, being another cool asset of this story. There’s a possibility one may’ve been alluded to. All that remains for this review is to update the bounty-board, and there were many bounties I could include. But most were more the jokes of a bored artist, and there was even the inclusion to one of his other projects, The Redeemer, in the Plutonium Falls wall of bounties. So I’m just going to stick to the villains that appeared outside paper, dead or alive.

1. Yolanda Catallus – 5000 credits. Knowledge that she had become a famed criminal made it likely that House Catallus would be shamed and unlikely to pay reward for her rescue.
2. Kal Jerico – 1200 credits. A price high enough to bring out the greediest wanted criminal scum out of hiding to claim the reward of, and a worthwhile trade off for bringing in Vandal Feg.
3. “Outlands Annie” – 1000 credits. Affections made it that Kal dropped his claim on her.
4. Bucket Head Jaxxon & Plate McGrew – 500 credits each. Price just worth pursuing them both to the death-trap of Raintown.
5. Oleg Kaspo – 300 credits. One of the more dangerous breed of escaped pit slaves.
6. Raiff Fortuna – 100 credits. A half-bounty; wanted for murder, robbery, torture and non-payment of guild levies.
7. Escaped pit slaves – 80 credits.

Bursting straight into action, Code of Honour sets up Kal and Scabbs charging gung-ho into a Scavvy camp to rescue one of their bounties. This one’s heavy on the action. Straight away Kal & Scabbs are gunning down scavvies, and just moments after a giant, mutated Crazy Bone, escaped from the nearest child’s mind attacks them. The Scaly almost downs Scabbs but Kal has the route to rescue covered like a professional. They untie the unhappy soon-to-be-meal and begin their escape, and the prisoner is a Van Saar. We’ve yet to see all of the gangs make an appearance. Orlocks and Cawdors are yet to be seen and I’m unsure if there have been any Goliaths, as the punk look is part of the aesthetic style of Necromundan underhivers. They’ve certainly not featured as a gang yet, that much I know. Here we have a Van Saar, and a juve by the looks too. 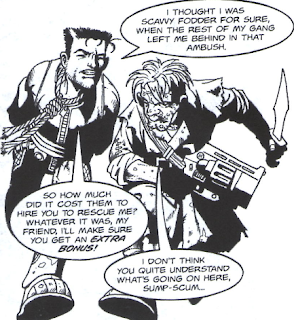 Whilst escaping the Van Saar bounty finds out he’s only being escorted to the nearest guilder court. He tries to barter for his freedom, but Kal is uncompromising. In this episode it is established that Bounty Hunters on Necromunda follow a Code of Honour. Once they take on a job, they are set in stone to finish said job.
As the three escape they run directly under a Scavvy ambush. From above the scavvies rain firepower upon the protagonists. Kal spies them just in time and alerts the others, pushing the bounty to safety. Just in time the bounty hunters duck behind cover and narrowly avoid becoming pincushions. We see that the code of honour puts highest value on the bounty, as Scabbs is second priority and ends up being hit before getting behind cover due to Kal pushing the Van Saar and not him. 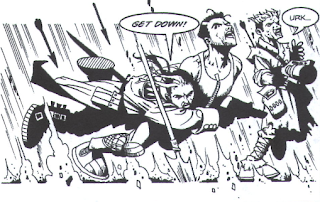 The three are trapped behind the barest scrap of cover and under immense fire. The scavvies overconfident and not well versed in tactics decide to swarm the bounty hunters’ hole-up en force. Needing every asset they can muster in the ensuing moment of chaos, Kal and Scabbs untie the juve and hand him a gun. The three put up a hell of a ruckus, gunning down their attackers bravely until they are so thinned they run away. The triumphant juve is shocked to find that after helping survive the onslaught he is still being taken to court. As he’s chained and led off we see Kal isn't heartless, just professional. The code of honour cannot be broken, but as soon as they deliver him (and that contract ends), they offer to bust him out of court custody... for a meagre 400 credit fee.
This episode is good in its own right. It gives us a tidbit more about the Bounty Hunting profession. The story is good. It is fun and filled with action while being campy in better integrated ways. It doesn't just randomly pop action or comedy in because. None of that rubbish. It even uses the crammed action-frames to transition well, showing the progress of the combat rather than squeezing everyone together. I would even like the juve to appear in an episode further down the line, with a name to boot. 7 out of 10!

1. Yolanda Catallus – 5000 credits. Knowledge that she had become a famed criminal made it likely that House Catallus would be shamed and unlikely to pay reward for her rescue.
2. Kal Jerico – 1200 credits. A price high enough to bring out the greediest wanted criminal scum out of hiding to claim the reward of, and a worthwhile trade off for bringing in Vandal Feg.
3. “Outlands Annie” – 1000 credits. Affections made it that Kal dropped his claim on her.
4. Bucket Head Jaxxon & Plate McGrew – 500 credits each. Price just worth pursuing them both to the death-trap of Raintown.
5. Van Saar Juve – 400 credits. Fee for rescue from guilder custody.
6. Oleg Kaspo – 300 credits. One of the more dangerous breed of escaped pit slaves.
7. Van Saar Juve – 200 credits. Held up a gambling den by himself.
8. Raiff Fortuna – 100 credits. A half-bounty; wanted for murder, robbery, torture and non-payment of guild levies.
9. Escaped pit slaves – 80 credits.

Next review is another four-parter in which we see the return of Nemo and a couple of other main villains too....
at 8:11 pm