So it's a little late. Yadda yadda. You know the routine by now. Hope y'all enjoy it anyway!


This is the last of the Kal Jerico comics. After this I've three whole novels to cover – Blood Royal, Cardinal Crimson, and Lasgun Wedding. Oh, there’s also a Warhammer Warped Visions imagining of Kal Jerico as a Warhammer Fantasy character. It is a comic, but not Kal Jerico. No, Cal Gerrico is who it is.
After this review I’ll get on reading the novels. It’s apparent to me, though, that my very in-depth method of analysis/reviewing won’t be as efficient for novels. A chapter-by-chapter review would be inane. Those only really work when I'm doing the comics because the multi-parters weren't presented as a whole story. No, they were spread out over several issues. So, I’ll be reclining to the more atypical generalised book reviews for those I think. It doesn't mean that everything will slow right down on here though. I still intend to post regularly. First things on mind while I'm reading the novels are my post-comic impressions of Kal Jerico, Scabbs and Yolanda. I may list the Kal Jerico episodes in order of favourites too. It’s still in the process of my thoughts.

Crimson Tide is truly the Kal Jerico episode that jumps the shark. It’s way out there. For the first two parts we’re re-acquainted with Wayne Reynolds art.
Anyway, the backdrop is the Sump: the toxic waters located at the deepest depths of the underhive. It frequently sees spider hunters, who seek the riches brought by the jewel-eyes of mutated giant spiders. We see one such party patrolling the Sump, when they’re ambushed by the mother of all spiders. Possibly “Old Shequeg”, who is named at the beginning (hell, I'm going to assume it is). She destroys the vessel and only one hapless hunter survives with a possible rescue in sight.

Cut to the Sump Hole and Kal is on one of his get rich quick schemes by dressing up Scabbs as a pirate captain? Wait, what? Well it’s not quite a pirate captain, but he sure looks and acts like one. Kal’s scheme is to fool gullible heavy-pursed outsiders into giving up their money on a “spider-hunting expedition” in The Sump, and they have quite the catch. It’s all pretty farfetched. Of all the story, this bit is the hardest to swallow. It’s 60’s Batman campy.
Cut back to the survivor from earlier, and we’re re-introduced to the villain we've all been expecting to see since the title. So, what happened to Cardinal Crimson? Following on from The Nemo Agenda Cardinal Crimson is filled with the spider’s venom and a thousand tiny spider eggs. He then believes his true purpose is upon him. No, the last true purpose wasn't the actual one. Like Harold Camping, Cardinal Crimson has a tendency to change his mind about the apparent “truths” shown to him. He now thinks that Old Shequel is a manifestation of the Emperor himself, and he is her herald and prophet. After acquiring knowledge she is in the local vicinity by the survivor from earlier, he has him tossed overboard by Brother Beltane.
Whilst being entirely so out there that nobody could've seen it coming, I like it. Crimson, host of “Spider-Emperor” with spiders bursting from his pulsing flesh – I think it’s the look that does it.

This part begins with Scabbs on a rant about Kal’s stupid ideas. Kal’s plan was to originally skirt around The Sump, avoiding any actual danger, and pretending that all the spiders were in hibernation. They’d walk out richer. However, they all end up being captured by Redemptionists, who bring them to Crimson and his base of operations. 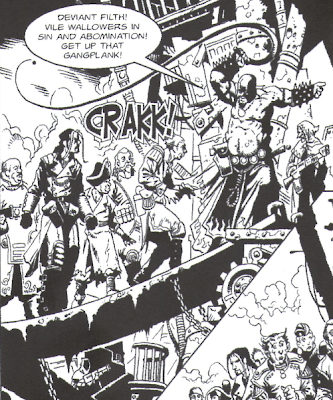 Crimson now has a small army behind him, and within a few seconds of noticing Kal is aboard, he has him beaten. Here’s where we find out Beltane has been replaced by Vandal Feg. This affirms all the things I complained about in The Nemo Agenda. Firstly, Crimson needs an audience. Why else would he have replaced Brother Beltane? Secondly, his suddenly acquired want to kill Jerico personally was completely out of the blue. Here, Crimson has Kal right where he wants him, and doesn't kill him right away. Crimson Tide draws a few more parallels to bond films in this way.
While Crimson recaps on what we already know, Kal gets the snot beaten out of him by Feg. There’s also this line:

This is where a chance at a deep look into the psychosis of such a gang as this is missed, and we’re only left with bare-bones trying-to-be-comic villains. At least Crimson is back to his campy self from his original appearance, but as a character he never develops.
But where is Wotan in all this? We briefly saw him earlier in the flashback when they were boarded. He escaped the boarded ship and swam back to land.

Wotan runs back to the Sump Hole and finds Yolanda. Then we have dialogue straight out of Scooby-Doo. This is made even worse by our new artistic arrival. I said in Homecoming that Dylan Teague was my least favourite of the Kal Jerico artists. Browsing ahead I mistakenly thought the last three parts of Crimson Tide were drawn by him. So, I apologise.
What’s worse than an artist that seems to have no clue of what he’s drawing? – A less talented artist that copies him. Ladies and gents, Steve Yeowell – my actual least favourite of the Kal Jerico artists. It’s not bad enough his renditions are bland and featureless knock-offs. He also manages to make Kal Jerico himself look like an unkempt, middle-aged Viking. Oh God. 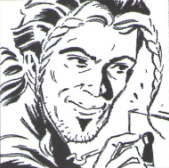 Kal and Scabbs have been imprisoned by Crimson, but in the same page they escape and garner themselves some new weapons. Racy pacing and all that and we’re right onto the swashbuckling and gunfights. There’s a pretty inventive bit where Kal dispatches a good deal of the Redemptionists by blowing a hole in one of their tin-can flamethrower backpacks. Yet again, bad artist strikes again.
Just as Kal is ready to head off, Shequel arrives. Here is Yeowell’s one redeeming quality; he does some really freaky looking eight-legged freaks, maybe the best seen in this comic series altogether.

Spiders of all sizes swarm Crimson’s oil rig. Kal Jerico and Scabbs fight off those headed in their direction with scavenged flamethrowers. Kal improvises an escape leaving behind a volatile mix of sump toxic liquid and flamer fuel. Finally, Shequel ascends to where Crimson awaits, taking the joyous fanatic up in her mandibles.

Crimson serves yet again as a useless cog in the plot’s machinery, only there to forward the plot, and being dispensed of quick-smart shortly after. Shequel is caught in the earth-shaking explosion and is sent flying directly towards Kal and Scabbs who are midway through their disappearing act.

The corpse of such a colossal spider impacting on The Sump causes a tidal wave of massive proportions. The protagonists’ makeshift raft is caught by the onslaught and Kal & Scabbs are just able to pull themselves onto Shequel’s corpse.

At that moment Kal comes face to face with Vandal Feg. Negotiating with the savage proves useless (Surpringly...) so the two fight to the death aboard a slowly sinking corpse. To make matters worse, Shequel’s children now see her dead as a free meal. Giant spiders flood the corpse. 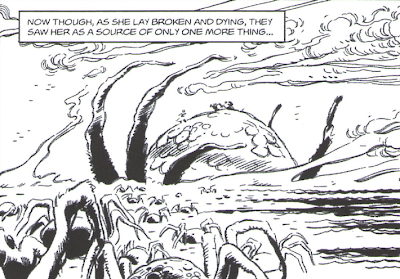 Vandal Feg seemingly gets the upper hand. Unsurprisingly, Yolanda comes to the rescue, harpooning Vandal through the chest. Kal and Scabbs get to her boat by... running across the approaching spiders (I don’t know if this goes down well with me, if it does it’s in the same kind of way as the scene with the crabs in At World’s End does).

We leave off with Kal typically having learnt nothing from his own folly. Rating... rating. Okay, Crimson Tide – 6.5 out of 10. It has some genuinely really enjoyable moments, and some of them are quite farfetched, and on that same note, that’s also what really brings it down. It does, however, remind itself to still be enjoyable, even while making little in the way of logical sense. What is really the major pity of this episode is the way it leaves off in the middle of nowhere.
Crimson may as well be dead, but he’s not, and I'm kind of dreading having to read a whole novel about him (knowing what the writers have churned out so far). Feg should most definitely be dead after what may well be one of Yolanda’s crowning achievements. There’s no indication here what’ll happen next, or even how it could tie into the first novel.
What I think happened was the comic was about to be pulled, so the team behind it decide to go out the way they always wanted. No consequences or any of that. Much later on a fan writes three books of what he wanted to see happen next, thus the open ending.

Well, it’s been fun so far in. I've really enjoyed finding out about this character. In honesty, I love all of the first four and wouldn't change any of it. But as the series goes on, I find myself thinking of more and more ways that I would've preferred to see episodes play out; more ways they could be improved. Still, it’s been fun, just not quite as I expected. A lot less Necromundan bounty hunter and a lot more flight of fantasy.

I’ll keep you posted until the book review for Blood Royal is ready. Hope you've had as much fun as I have.