Okay, last Monday technical difficulties returned. So fast-forward four days and now I'm uploading. I've been a little pre-occupied, and took a little time to do something for Halloween, but here it is...


I'm going to jump right on where I left off last Friday. Dylan Teague – as a regular comic book artist he’s kinda decent. He can keep faces looking pretty coherent and he has a nice clean style that most regular people couldn't accomplish. There are my praises of this particular artist, but that’s where the line is drawn. I have quite a few criticisms of Dylan Teague, and they all seem to revolve around one particular problem: he doesn't seem to know much about the background.
This is a problem that has plagued all sorts of fantasy and sci-fi media over the years. Somebody gets their hands on a particular background and then tackles it with no real knowledge, and it is quite irritable. This is the sort of thing that can induce nerd rage, and it does make me look pretty lowly at Teague’s Kal Jerico work. However, as an able artist (not as a profession) I am okay to still acknowledge that Teague has his strengths. This must've still been quite time consuming. What he could have done with was some research. Then again, I feel he had at least some knowledge, but not enough to stop him making many glaring mistakes and to point them all out I'm going to be extensively reviewing his work on Homecoming. As a matter of fact I'm going to be reviewing his works in this more than the story itself. Why? Because the story is standard for Kal Jerico, it’s a fair stab, but the art is really, really off-putting.

So let me tackle the story first. Yolanda and Scabbs, fresh from their recent adventures have run into trouble with a Scavvy gang. Yolanda, having got carried away with her butcherous methods, has sparked the ire of the gang by attacking the gang at camp and beheading the chief and his three lieutenants. On the run, the duo collide with an old face and his new robot canine. It’s quite hard to believe when you see them clearly looking at each other whilst they run headlong into this accident-in-the-making. There are no obscurities, it’s pretty damned clear. At least Kal was looking the wrong way when he ran into Vandal Feg back in Motherlode. 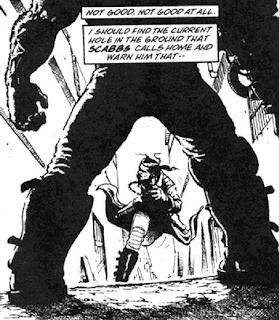 So the four become quickly acquainted/reacquainted, and it seems Kal has become up to speed with the Yolanda-Scabbs situation before he ran into them. All of the characters seem in keeping with their most recent character developments, even Kal’s childish pride in his new toy. Yolanda is still really quite confusing. Only Scabbs seems to say anything of value. Clearly injured by Kal’s disappearance, his “welcome” makes the most sense, especially the way he’s usually the loyal backup. It becomes apparent that Scabbs is kind of like a dog in this, though only metaphorically. He obeys Kal to the letter and performs exactly what he asks, but he’s grown dependant and fond of him over their time together. Kal is after all the superior fighter, and frequently looks out for Scabbs. He keeps him from danger. But Kal is quite egotistic. Scabbs isn't.
Scabbs not only lost his closest friend and comrade (in his perspective) but also became quite vulnerable. To Teague’s credit he shows the injured child inside Scabbs very well.
Kal and Yolanda fill eachother in on their circumstances. Now Kal also was on a bounty hunt, and also sparked off the ire of a gang (in his case Orlocks). Yay! First appearance of the Orlocks, and yet again, Teague does these kinda spot on. All they need are those shades.
Problems arise as the protagonists realise they’re surrounded by two separate forces. Uniting to up their odds of success, they take the high ground – only for Yolanda to jump right into the fray when the enemies get close. Kal worried about his ego being damaged follows en-suite. The following fight feels like it comes partially out of Scott Pilgrim, therefore I’m listening to this while writing:

The battle is won and Yolanda sets about gleefully collecting the heads of her bounties with much profit to be made. So a temporary alliance is made in the wake of victory, the four having so efficiently dispatched two whole gangs and made quite an earnings.
As Yolanda leads the way Kal and Scabbs fall just short of earshot. Scabbs asks if Kal really trusts her, to which he responds in all due honesty, “Of course not... but at least this way I know where she's going to be and I can keep a close eye on her.”
This final sentiment is a nice addition, at least it shows that Kal is thinking as most of us, the audience, are thinking. It also makes me think that her recent development isn’t bad writing and there will be ramifications down the line.
So the story doesn’t sound bad eh? I’ve deliberately left it devoid of Teague's handiwork to this stage. The story is decent. A 7 out of 10 is in order for the storytelling. The art is a different matter.

First off, Dylan Teague’s art seems a little too clean for 40k. That’s more of a minor criticism, but Scabbs ends up looking like a schoolboy who went to a private school who is temporarily down with the chicken pox. He is however still identifiable as Scabbs, but he doesn’t quite look right. Wotan and Kal have been drawn up accurately, no criticism there. Yolanda – good God, glancing over this I had no idea who she was. Talk about a redesign. 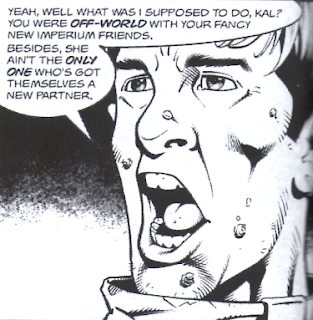 Gone are her punk aesthetic and the body language of a crazed, blood-thirsty outlaw. She now is a scantily clad 70’s barbarian maiden sporting a katana and a space marine pauldron. If it weren't for her facial tattoos and her being called by name I’d not know who she was. Even worse she now either poses suggestively at every chance she has or puts on a worried furrow. Talk about out of character. Her appearance defies what she’s saying and doing. In short, this isn't Yolanda. This is some bimbo they pulled in as a place-holder. It’s an affront to what I know about Necromunda and 40k.

Then there’s what Dylan doesn't know about the background. The Scavvies I didn't even recognise. Some look closer to Van Saar gangers and others have awful 70’s “medieval armour”. Hell, one even has fangs. I know Scavvy ganags are home to many mutants but these are drawn so cleanly that this ganger may as well be a vampire.

He also seems to have no clue of what regular 40k weapons look like, the only exception being Kal’s laspistols. Well even those aren’t quite done right originally. The end result was edited out but I stumbled across the original frames when I was half way through these reviews.
Dylan Teague has a blogspot of his own (http://dylansdrawingboard.blogspot.co.uk). On this site he’s uploaded many examples of his work, including Kal Jerico. In the frames shown (http://homepage.ntlworld.com/d.teague1/page%204.jpg) it shows Kal’s laspistols ejecting casings from the side. A laser pistol that’s ammo source is a power pack. It operates much in the way of a torch with batteries. So that’s all wrong too.
Some things are sacred, and unfortunately Dylan Teague screws up a little too much here. As an artist in general, he may well be good. But as an artist for Kal Jerico, he’s bad, and not too well suited for the undertaking. This is why he’s my least favourite of the artists that worked on this. Dylan’s art brings Homecoming down to a 6.5 out of 10.

So I've almost covered all of the Kal Jerico comics. There’s just the five-part Crimson Tide and then I’m onto novels. As of yet I’m not sure how I’ll cover them, but I’ll tackle that issue when I get to it. See you Friday (Probably Monday now) for Crimson Tide.