Originally this post was supposed to go up last Monday. Due to technical difficulties I was unable to upload the complete version. After communion to the Omnissiah, the ancient machine to which the scanner is linked is now functioning! I now intend to have parts 4-6 & 7-9 done and uploaded over the next two days. Hopefully the Machine-God will be kind over the next few days.


Above & Beyond is something unto itself. It’s not quite the regular Kal Jerico series. It’s longer & more fleshed out than any of the previous multi-parters and it’s not technically the tale of Kal Jerico, Necromundan bounty hunter. It is still Kal Jerico, but as the title insinuates, it’s a space-bound adventure, and it covers a lot more than bounty hunting.

Really I’d say Killing Time was the part one to Above & Beyond, but seeing as it’s not I’ll refer to it as a prelude... maybe even a prologue.
Right off the bat the quality of this series is more evident. The flavour text actually tells us things that are insightful and useful to know. We see the Enforcers in action for the first time, and boy is this an action-packed opening. You can always tell when Kal is out of his league when he’s on the run right at the beginning of an episode. Spyrers, the full of Guzman Ludd’s hired muscle, a grossly overgrown giant spider, and Arbites – these are what we know to be more than a challenge for Kal. Whereas other gangs went for Kal directly, the Enforcers are operating under guise of a cull, entering the underhive to cut down the lawless and the innocent alike in an effort to keep the populace in order by fear.

We’re really shown the desperation of the situation as the underhivers flee, not bothering to draw weapons; the best chance of survival is probably being the farthest away in the crowd. We’re informed Kal has survived three of these culls before. Using his guile he dives around a corner only to be met by more Enforcers.
I can’t recall a situation where Kal has drawn his sabre and not breezed through a melee fight. Here, it’s apparent he’s in a desperate struggle, giving it his all. It is intervention from the loyal Scabbs that grants him a quick exit. Even then, there are more Enforcers in the immediate perimeter!

Asides from a wonderfully claustrophobic feeling this episode really continues in fashion of showing a scale of difficulty. It’s something that fundamentally makes it better than The Redeemer. The Redeemer is never shown as having any particular difficulty in dispensing his opponents, no matter how stupendously tough they become. Despite being shot, pistol whipped and clubbed over the back of the head, the armoured Enforcers still aren't out for the count. Dazed would be more accurate. Yes, down, dazed and reeling from the onslaught, but recuperating quickly. Given half a minute they’ll be back in shape.
Kal & Scabbs are on their feet again quickly. Taking flight before the Enforcers can capture them. Yet again the desperation of the situation rubs heavily on this episode. You know things are really dangerous when Kal instructs Scabbs to split ways. This Scabbs does. A lone Enforcer locks on to Kal, a guided round ready to take him down, but his superior belays his actions. While pulling his best Dredd face, he reminds his lesser that they only need flush Jerico out in the open. 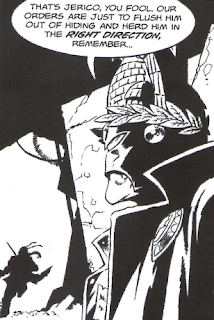 Kal rounds another corner only to be greeted by a strangely varied group. He jumps clean of the heavy, uses one of his well-practiced counterweight kicks to deliver a knackering kick to the oncoming Kroot, and just as he’s cock-sure that he can down strikingly-similar female “enforcer”, she springs her cyber-mastiff Wotan on him. Kal is subdued by her order, and the captured Kal is taken uphive.
Here we learn that they’re all the retinue of Madame-Inquisitor Jerico. Well, we already knew the heavy was. What plays out is an interesting angle on what happens when members of the Inquisition have offspring. Kal is very much reduced is psyche to an injured child, whilst his mother is every bit the cold, well-calculated agent to a higher cause. Her devotion to the Imperium has left Kal an abandoned child left to find a way on a harsh and overpopulated planet. She’s a brilliant Inquisitor, but a terrible mother.
Above the cloud-line of Necromunda she offers Kal a “job”, more than that, a chance to prove himself, and it’s all climbing to new heights from here.
Part One is simply great. No Kal Jerico story has had me this wholly hooked since Raintown. The atmosphere is even darkened to fit the darkened theme at play – 8 out of 10.

Kal is transported off Necromunda by shuttle to the Madame-Inquisitor’s personal Sword-Class Frigate – one of many ships orbiting the planet. There’s a nice reference to one of the Inquisition special characters in this sequence.
For what is probably the first time in his life Kal looks upon Necromunda from far removed perspective. In what I suspect to be Heleana (Jerico/the Madame-Inquisitor/Lady Jena Orechiel – take your pick) trying to tell Kal the significance to her role, she tells him of the magnitude of the universe, and how small an unquantifiable fraction of it Necromunda is. Much harboured angst and rebellion is still evident from Kal’s reaction. The lack of a father figure – and a mother that was never around – has moulded him into a much different path and perspective.

Determined not to be drawn into petty squabbling, Heleana moves things along, now is the time to meet the team. The whole retinue is in the process of training against melee servitors who look suspiciously like arco-flagellants. First we’re introduced to the heavy-set Vanyan Kloss, oldest companion and most trusted of the Madame-Inquisitor. He’s an ex-Enforcer, and doesn't seem to warm to Kal too well. Next is, Merelda, who Kal seems all too keen to meet. She’s deftly dispatching servitors with all of the agility of an assassin, and with exceptional use of a katana and knife too. All of her skill, we’re told, is by-product of Heleana’s training, and before Kal can become too infatuated, she also informs Kal they’re blood relatives. Finally there’s Mordak and Magos Tarren. Mordak is a Kroot mercenary, won over to Heleana’s retinue from a victorious death duel. Both, in my opinion, are brilliantly drawn by Reynolds and for different reasons.

Mordak, as a Kroot, is drawn perfectly. The way he leaps, runs and stands, his attacks, his hunched over eating, his demeanour and facial expressions. It may be safe to say that Reynolds draws a far more convincing Kroot than he does any human. We’re also told all the basics about Kroot, just in case you didn't know already, and also highlighting that the Madame-Inquisitor is of the Ordo Xenos. Now the reason I love the Magos is his spindly, almost skeletal frame.He looks like he’s fully embraced the Mechanicus way of life, operating machinery without having to afford it a glance. He also looks remarkably like Abe Sapien from Hellboy with his goggles on, which probably explains my immediate attachment. 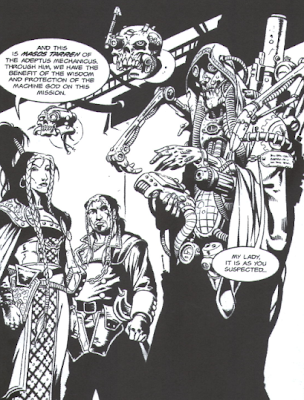 The Magos explains that one of Lord Helmawr’s ships is tailing them, probably intent on beating them to their goal. In a quirky twist we find out Lord Helmawr is Kal’s father. Though this is a little out there and weird last minute blurb, I do love how Heleana casually dismisses it. “It was all a long time ago, and just one of the many disagreeable things one has to do for the greater good of the Imperium.” Ever the professional, Madame-Inquisitor. Yet again, Kal’s left butt-hurt over the sudden imparting of news.
Skipping ahead, we’re now at the goal, and with some brilliant Martian techno-babble, we’re introduced to the objective – the Space Hulk Kronos.
Yet again, a solid 8 out of 10 score. Though despite a few major quirks, the story is still really quite engaging, leaving off on a cliff-hanger grander than last time. The story is pretty impressive. It’s to its testament that the cheese doesn't bring it down that much.

Wow, the opening of this is awe-inspiring. First off, the way the scale of the Space Hulk is shown – how the titanic Kronos (see what I did there?) dwarfs the almost ant-like vessel of the Madame-Inquisitor. Then there’s the piloting chatter as the vessel is taken in to a suitable docking location. It all sucks me into the universe, makes it believable, and I'm bought right there.

The boarding party is sent in through one of the melta-breaches, still fresh with freshly settling molten edges. The unified entrance of Inquisition forces is quite awesome in its own right. Kal’s still confused about the mission, so Kloss fills him in. They’re after xeno-tech, forbidden but highly valuable. As they take in the colossal room they've entered, Heleana tells Kal that she’s been tracking Kronos for quite a portion of her life now.
Kal still has one prominent question: what’s the hurry? So Merelda explains, and she seems to have a certain sadistic joy from doing so. “Because it’s entirely random about when the hulk will get sucked back into the warp. And if we’re still aboard it when that happens, then the daemons of the warp will tear out your soul and feast upon it for all eternity.” More than a little concerned, Kal hastens ahead. And for the first time in quite a while, one of his lines made me laugh loudly.
Then we have some transitional frames, and for once I feel they were handled really well by Reynolds. He uses them at leisure to show us the bizarre mixes of different alien ships, the journey of the protagonists, the surprises, the interior and exterior and finally the less encouraging – long-dead Ultramarines terminators. The looks on the faces of the retinue are harrowed indeed, and you can feel it. If what lurks on the inside can down the Space Marine’s best, what chances do the retinue have?

With little warning, the group come under attack. A flood of bizarre creatures attack the retinue. Again, Reynolds proves his competence, taking time to show the action play out. My first guess was these were very strange genestealers. After a maddening, swirling combat the proficient retinue stand victorious and bathed in the blood of their enemies. In high spirits Kal acts the fool, casually stating if that was the worst they had to face, then the mission should be easy. Vanyan and Heleana are quick to ground his expectations. In one of the best uses of transitional foreshadowing Heleana tells Kal that what they fought were merely mutated parasite-scavengers. What lies ahead will be much, much worse. 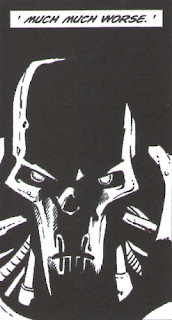 Wow, what a brilliant marriage of things 40k, brought together in a brilliant seamless blend. This really digs so deeply, so insightfully into the 40k background. It’s more than just a good Kal Jerico story. This is close to the quality of a chapter of Aaron Dembski-Bowden’s Night Lords series. The last time I ranted about something this highly was Nemo. Does this even beat my clinging praise of Nemo? I think so. Just barely though. One could say it goes above & beyond my opinion of Nemo. It’s much more than the most interesting happenings on Necromunda. At least, from Kal Jerico’s stories it is. Part three is a lauded 9 out of 10.

On Friday (hopefully Saturday now) I’ll tackle the next three parts. And on Monday (hopefully Sunday now) next I’ll have the parts seven to nine reviewed. Stay tuned folks.