Emerging from the eve of last week all sorts of crazy stuff has happened. In particular, Heresy Online is down by the handiwork of the re-emerged Russian hacker. Whilst I await it’s re-upload I am continuing my reviews and am just now noticing some major typos in the last of these. But the schedule engine moves ever onward and some brief editing has sorted this out. Today we have The Delivery and +++Colours (It is written like that, not quite sure why).

Now here’s a throwback to the cartoons of my early teenage years. I’ll explain later. The Delivery is an insight into another angle of the Necromundan bounty hunting business. Amongst other things, prisoner transfer is one of the contracts bounty hunters can accept from the guild. This is the centre point of this story.
Yes, Kal has agreed to escort a group of criminals to Sumpsville. One, however, is tricky business – a Ratskin shaman. The unrelenting preacher has put a curse upon Kal & Scabbs for not freeing him. Now Kal being the un-superstitious type brings his prisoner caravan back into gear. There is some wonderful joy incited within me at the story that is told by Kal before he leaves. It goes fittingly with most B movies of the horror genre. Kal explains in notion why escorting the shaman is a really bad idea, but he doesn't believe it himself. Perhaps what is more brilliant is the zoomed-out shot as they’re all trundling off – a giant skull with tribal markings is shown overhead glaring down at them. 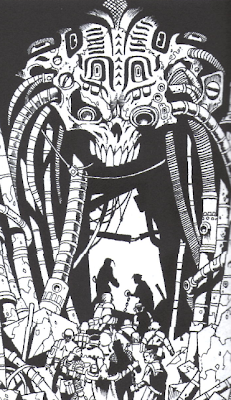 So the group heads off and weathers plague after plague of biblical styling. After three days of back-to-back onslaught (a hivequake, zombies, fire from the heavens, mutant rats, bat-like creatures not dissimilar from Mynocks, and Ratskins), and now considerably reduced in number, Kal now thinks there might be something to the Ratskin’s curse. Now unwilling to take the Ratskin the whole way, Kal seeks a way to take care of him without it coming back to bite him. 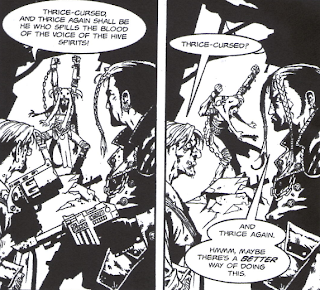 Kal takes the party on via the route of Ripperjack Gorge, which is a scavvy outpost. Over Ripperjack Gorge is a bridge, but to cross one must answer these questions three pay a fee. Once arrived, the scavvies try to ambush Kal. Of course, Kal has been through far worse and dispatching three downwind scavvies is a breeze. Despite this, Kal still offers a fee to the tower garrison – the healthiest of his party. Of his entire prisoner caravan only one individual doesn't seem disheartened or lacking in energy. The scavvies take the shaman (just as planned) and Kal is free to fulfil his contract without any more complications. At least, that’s what we can assume.
The idea of this episode is rather cool, and I did enjoy it. However, execution was a little lacking. The shaman himself goes on and on, his head thrown back. Not unless he’s stopped preaching does he lower it again. The dialogue he emits is cheesy beyond belief, but at least he makes more sense than Cardinal Crimson from the last episode. To top it off the ending is a tad lacklustre; there are no surprises in the story, everything goes just as you’d suspect. This doesn't make it bad however. If anything I enjoyed it for the same reasons I enjoyed Codename: Kids Next Door when I was younger, and there’s a reason for this comparison.

Asides from the non-stop rambling of the shaman caught up in his own story, going on and on to the point of hyperventilation out of excitement. He also throws back his head to shout in the exact way the characters from KND did. I acknowledge this gives it a very kid-orientated feel. It’s a little simple and could do with some polish. Wayne Reynolds could've even given the atmosphere of Raintown, but the atmosphere goes right out of the window at the point the plagues start and the shaman is all-the-while attempting his best Numbuh 4 impression.
It’s flawed, but it has a sort of nostalgic entertainment value. Well, at least for me it does; 6 out of 10.

Ode to joy, Karl Kopinski has returned! Unfortunately this is the only time he does, but to make up for it he’s wheeled along his brother Stefan and they've upped the quality of the art. That’s right, this issue has the best art in Kal Jerico. I've scanned ahead, nothing tops it. And it is so refreshing. Episode after episode Wayne Reynolds art was getting more & more cartoon-like. Now, as I've said, he’s not a bad artist. There are others further along that show that he’s a competent artist for Kal Jerico.

Here’s the thing. Necromunda’s very image is flogged to me on the rulebook, gritty underhive battles between gangs. It’s brutal action in an industrial wasteland. Wayne has with episode to episode detached little-by-little from this. Now I'm not sure if this is completely his fault. After-all, he doesn't write the episodes. Well I don’t know if that’s even true, for some reason the collected comics no longer list the authors (with exception to +++Colours). They only list artists.
Point is that plus, plus, plus Colours brings Kal Jerico back into the very essence of the setting. War has broken out in the underhive. So bad is the conflict that the Enforcers are waiting this one out in the safety of the upper levels. The gangs have formed coalitions, The Sump Dogs, Black Widows and Steel Krew on one side and the Red Death, Cy-Clones and Dead Moons on the other. We’re introduced to new gangs we've not heard of before, which is cool, because the Necromunda background states there were other unnamed gangs about.

So who would be so brave or foolish to undergo regular business in the underhive at a time like this? Kal Jerico. Be honest now, you knew that was coming. They’re searching for ganger Rolon Venk of the Radium Sharks. Quite simply the whole story is them using their savvy, quick wits and trickery to survive this battlefield and find Rolon, and they do in the end.

I think the reason I like +++Colours just a tad more than The Delivery is simply the art. It feels the quality of the whole storytelling experience has been raised primarily due to it. Not that it makes it the best I've read. It’s good, but not great. But there’s very little mediocre writing. The relationship between Kal and Scabbs is where the fun in the dialogue comes out. Really though, the depiction of a full-on war between gangs is drawn really well. We see a good few different zones. There are open street-fights, trench wars (complete with employed barbed-wire) and also skirmishes in the ruins. Best of all, the action takes its time. None of that cram-all-of-the-action-into-one-frame rubbish that Reynolds pulls a little too frequently. Also, movement looks more natural and guns have become more believable, rather than the cut-down star wars replicas and Scabb’s pistol, which he clearly stole from Harley Quinn in his last visit to Gotham.
+++Colours  earns itself 7 out of 10, and is a refreshing return to what the Necromunda franchise is about.

Next time we have The Freak and Killing Time, which debut the artistic works of Daniel Lapham and Paul Davidson respectively, but only briefly. Following these we’re onto the Above & Beyond storyline, and we return to the familiar stylings of Wayne Reynolds.
at 7:45 pm