Part four continues from the previous a little further down the line. The boarding party are busy probing the areas ahead with servitors. For what seems to have been the past hour or two they've systematically been rooting out the many traps that Kronos has neatly tried rebuking them with. Yet again the quality of strategical chatter sucks you right into the setting. It’s truly amazing how the little things can make all of the difference.
Just as some of the group have gotten a little too comfortable the last of their servitors’ runs clean into another trap. The resulting blast of raw energy completely levels all flesh and organs from the servitor. Only a withered skeletal frame and cybernetics remain. I wonder what alien race could possibly possess that kind of technology?

As Kal muses sentimentally in Shakespearean pose, he wonders now their lobotomised stock of test-dummies is gone, how they’ll test for traps. The looks he receives are enough to give him an answer. As far as travelling in the Inquisitorial retinue is concerned your life is expendable for the greater good of the Imperium. Just how likely you are to be put at risk depends on how valuable (/long-serving) you are.
Before things can get too settled Vanyan finds a recently expired soldier bearing the logo of Lord Helmawr. Determined to beat Heleana to the prize, Helmawr’s men have taken a far less subtle route to the source. Many of his clueless lackeys have sprung what should be the remainder of the traps. Merelda hears gunfire, and Heleana spurs on her group into the fray where awaits a Necron beholder. Now I've just made that name up because I have no clue what it is. It’s not divulged to us. It’s just a massive floating skull bearing a Pharaoh's mantle and shooting gauss beams from its eyes. It sounds just a bit like a beholder, 'kay? And this beholder is busy decimating Lord Helmawr’s troops. 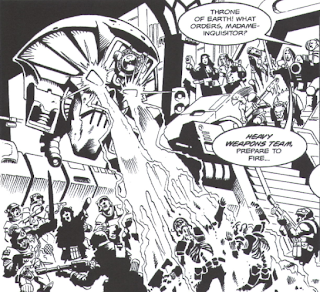 In true military fashion Heleana splits her fire-teams to tackle the opponent as best suits the situation. Kal, Merelda and Mordak draw fire, and Tarren and Vanyan focus fire. I love how they show what volumes and types of fire are required to bring down a monster such as this with record speed.
Things then get even more heated. Lord Helmawr’s forces aren’t the least bit grateful of this interjection, and furthermore, refuse to cede to Inquisitorial edict. Things look spurred for some juicy Imperial in-fighting. Luckily Kal is on alert and draws both sides attention to an even bigger threat... 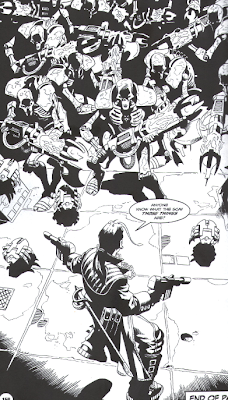 Above & Beyond has some hair-raising cliffhangers, guaranteed to get 40k geeks dizzy with excitement. I love Lord Helmawr’s forces – how their military uniform is a mixture of WW2 German, Renaissance Italy, and a tad Ancient Roman. It looks fantastic. Yet again this episode has a little cheese but cuts to the chase quick enough to keep you swayed in the immersion of an exciting story. Some of the grandeur of the last part is gone, but I still really like it – 8.5 out of 10.

Necrons, if it weren't for Space Marines they’d have the best all-around Troop choices in Warhammer 40,000. I’m so glad Gordon Rennie and Wayne Reynolds picked up on this. Almost the entirety of this part is one well-paced fight between the temporary Heleana-Helmawr alliance and the Necrons. There’s some exposition at the outbreak, but anyone with even the most basic knowledge of the Necrons will know what is being said. That said, most of the Imperium’s populace have no knowledge that Necrons exist.

Ultimately teamwork pulls through and the weathered humans count their numbers. Most of Helmawr’s men are dead, including the most objectionable of them. Of Heleana’s retinue only Tarren was lost in the struggle. It’s strange how a character I knew nothing about evokes such a melancholy mood in me – especially as his skeletal remains are barely recognisable.

Before we, or Kal, are given much time to be sentimental over losses, a new force arrives. To add to Heleana’s “small scale” operation, and the forces of Lord Helmawr, now just freshly arrived for their claim on Kronos are the Deathwatch! Oh wow oh wow oh wow! Now we have a bigger potential threat; 8.5 out of 10.

So how does an intro blow Nemo’s out of the water in my opinion? – Space Marine boarding torpedo entrance. Immediately the scale has been restored. Watching these professional warriors walk from the mists of their destruction is truly thrilling, and under the command of an Inquisitor no less. He also has a small retinue, and it’s fun to test your knowledge of the background while looking at what they consist of. 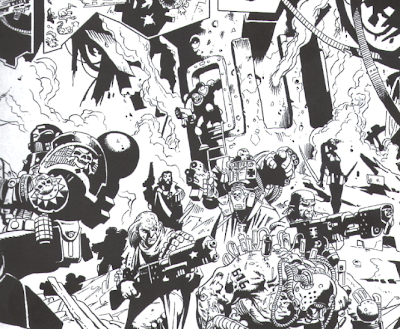 Things are now immediately racier. There’s a lot that Heleana hasn't told Kal, and now is the time to fill him in. We’re given the origin story of the Necrons as written in their first codex. For the fact I know it already – wow! The visuals really keep the up-scaled sensation fixed well in place. We see really epic images. I don’t use that word often. So when I say it is epic, it really is; sweeping, endless Necron legions, a space war of an ancient time eons bygone, even the remnant buildings of their empire standing in unabashed solitude – a testament to their timeless nature. Sure, the story’s the same, but the artwork brings to the forefront imagery we've not seen before. Mainly the lone temple structure, I've never seen one exactly like that in the 40k universe. 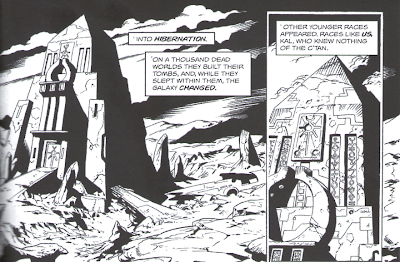 Cut back to the Jerico ensemble and they've now located their objective. Doors big enough to be the gates of Hades bar the way, a large Necron glyph inscribed on the front. Kal is now quite mad at what he perceives trickery on his mother’s part, but like us the question most pertinently gnawing away at him is what’s behind that door? “This hulk is the tomb of one of their most powerful servants”, “a terrible weapon which we cannot allow the C’tan to regain control of”. 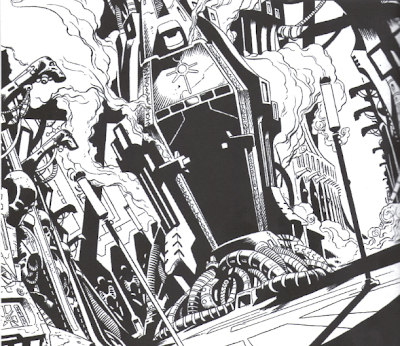 This is potent stuff indeed, this kind of story is brilliant. I'm considering the flaws here, because this one was so good I may flat out give it 10 out of 10 while I pick my jaw back up off the ground. The setting, already something vastly unimaginable as it is, has just been upscaled by all the pieces in play. It’s the kind of stuff that has kept my love affair with Warhammer 40,000 aflame all of these years, despite the ever increasing price! I'm truly awed by the connotations here. Y’know, that kind of awe that leaves you deep in impassioned fan boy mode, unable to shake the shivers you've just received for a good few hours. The only downside is the occasional smattering of comic book atypical lines. They can bring you out of the situation real quick, but here the story is so up there and racy it’s hard to notice these instances for long. Part Six, 9.5 out of 10, it’s masterly, but still oh-so-slightly out of place every now and then.
at 8:37 pm