Part Seven starts with Kal off on a tangent of being lied to.  Funny thing is, having now re-read Above & Beyond, that Kal seems to have assumed all of this. I don’t think the Inquisitor or any of her retinue had told Kal what he believes the truth. As the group set melta charges on the door he still hasn’t finished ranting. Oddly, Kal may be close to the least likeable of all the characters in this story. He spends most of it in a moody adolescent mindset. Some of the time you can sympathise, but sometimes you just want him to shut up. This is one of those times.
At least he has the good decency to ask a logical question: it’s one of those, ‘Surely we can harness the ring of power’ questions that the weak of will ask in these good versus evil confrontations. It’s not that Kal is of the blackened soul of a malignant force of darkness. He’s just a regular human unawares of how the weapon they seek will ultimately eff them over without a moment’s doubt.
Okay, Kal’s not that bad in this sequence. The retinue’s answers seem pretty much in agreeance that the Madame-Inquisitor is the opinion to be followed and the team blow clean through the doors in quite the expansive explosion and enter the chamber wherein lies their objective.

As they all bask in the true ancientness of the place the story takes a twist. Vanyan Kloss betrays his companions. Acting as the herald to Inquisitor Malva, heading the Deathwatch boarding party, he reveals their motives. Whereas Heleana intends to destroy the Necron weapon, Inquisitor Malva and his followers plan on harnessing it to bring the Imperium’s own weaponry up to speed.

Now backed by Inquisitor Malva and his terrifyingly powerful accompanying crew, Heleana is reduced to fighting with her words. Malva orders the Deathwatch squad to arrest Heleana and secure the sarcophagus containing “the weapon”. Here’s where things take yet another turn, the Captain, a member of the Raven Guard, who trusts not the words of Malva, takes charge (I guess he got the best asset of his Primarch) and is on the verge of taking in both sides for questioning when the whole tomb starts coming to life. Out of the sarcophagus steps a colossus of a Necron, and all of the action is about to kick off. 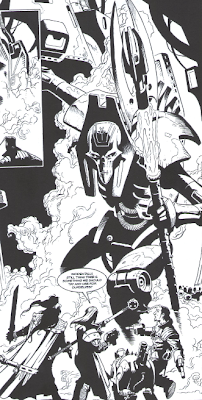 Whereas the previous part was kept alive by the urgency, action and scale, Part Seven boils down to the clashing of ideologies, and it’s a very interesting idea. It’s this thought that even within the vastness of a “unified” Imperium, there are still many ways for folks of different dogma to break into violent segregation. This part is very intriguing, and I wish there were more of it. However, in writing terms this argumentative part of the story is far from a masterpiece. It’s still very good, asides a little of Kal Jerico we have to withstand. Oddly, I think story would've been a lot better with some different treatment, like not going along with making the story all about this bounty hunter. Sure, it’s his series, but his teenage strops deduct from his likeability at times. For these reasons Part Seven scores 7.5 out of 10.

“Once it had a name: The Setekh, one of the greatest of the Necrontyr’s creations, one of the most powerful servants of the C’tan. Once it had a purpose: To bring death to every corner of the galaxy, to raise black pyramid monuments to its deathless masters on a thousand barren and blasted worlds. Now, awoken from its eons-long hibernation, it does not yet remember any of this. All it knows is that its rest has been disturbed, that its tomb refuge has been invaded... even after a slumber of sixty million years, its response is instinctive and instantaneous.”

That set-up text eh? Furthering this we have a flashback to the last time Necrons reaped the universe: Eldar clash against Necrons in a futile stand. I’d say this was the last vestige of memory the Setekh has. As it clambers from its statis, spying intruders, well, see above text. It then downs two Space Marines with blasts from his eyes. Dead just like that! And in the words of Kal Jerico, “How are you supposed to kill something like that..!?” That’s a bloody good question. Space Marines, the demigod-like elite infantry force of the far future. The kind of infantry that can best ten mortals at once in close quarters and walk through hails of standard issue fire like they’re walking in a light downpour of rain, and two are most definitely dead.

To make matters worse the damned thing is only at a small part of its full strength. While it rampages through the Inquisitor Malva’s boarding party, Heleana deduces that they must destroy it’s sarcophagus to weaken it. Merelda, who is ever ready to prove herself to mother, jumps ahead to exact her will. Almost immediately she is gunned down in a hail of fire. This course of action by Vanyan Kloss may have been his worst decision. Heleana gives into her emotion, the death of a family member obviously is the push that bring about her ire. She unleashes Kal and Mordak, who outrun Vanyan’s rapid fire. In one hell of a co-operative feat, Mordak injures Vanyan with a shuriken while Kal detonates his ammo supply with some well placed shots.
Kal then goes in with the sabre, just as furious about Vanyan’s actions. Vanyan counters and locks up Kal’s arm, goading him into attack by insulting his quality of melee fighting as being all bark and no bite. So, responsively, Kal headbutts him. The joy of this scene had me in an ecstatic fit of joy.

Mordak has frozen up, chirping a desperate sentence. Kal being unable to break to the language barrier is perturbed, that is, until he sees what Mordak sees. The Setekh has turned its attention to Mordak, Vanyan and Kal. Whilst being horrified by this discovery, Kal and Mordak are still fast enough on their feet to dodge the gauss beams of the giant skeleton. Vanyan however, much to his displeasure, gets his just desserts. 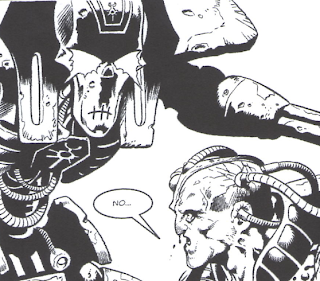 Hereon the situation becomes more and more desperate as the surviving Inquisitorial forces are cut down and almost enveloped by Necrons. Things aren’t looking too bright at the end of Part Eight.
8 out of 10, for an intriguing and unpredictable action sequence. It’s only let down by how Vanyan stays on overwatch while his allies are cut down around him. Something about this seems to defy the laws of human psychology. Otherwise, it’s great, highly enjoyable stuff.

While Kal and Mordak put up a last stand that the defenders of Rorke’s Drift would be proud of, Heleana (who is protecting the downed Merelda) devises a way to escape this apparent death-trap. Seeing Malva in the process of teleporting away she orders Kal to stop him. A pinpoint shot severs Malva’s hand clean off, and Malva is sucked into the warp. More just desserts. 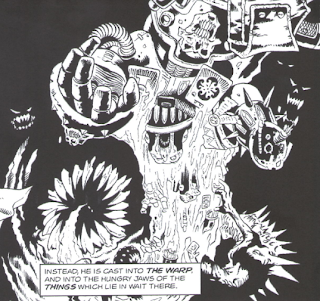 Heleana and her surviving retinue make a dash to Malva’s teleporter homer. Urgently Heleana requests the Deathwatch vessel to teleport them away from danger. The Setekh draws closer and right at the last second, as they all seem doomed, they teleport back to the vessel, all in one piece. Heleana commandeers the ship by Inquisitorial edict and orders exterminatus upon the Space Hulk Kronos. Cyclonic torpedoes rip into the gargantuan vessel, but before it is entirely obliterated it’s sucked back into the warp.

Kal and Heleana are left to ponder the success of the mission. Now free of the mission, they check in on the recovering Merelda in her medicae chambers. This is where the ending shifts from a lot of the power of the story before. Kal is gifted Wotan by Merelda and not wanting to be in the service of the Inquisition any longer, heads home to show off his new toy. This blindside happy ending makes sense, but could've been handled so much better. It’s the suffering factor of Kal Jerico that the stories rarely seem to be long enough to space out the timing for the ending. Alas, they usually feel too rushed, even so in this nine-parter – the most expansive of all the Kal Jerico comics.
The final part gains 7 out of 10. The ending itself is pretty satisfactory and lives up to the forerunning material. It’s just the turn it takes when they visit Merelda.

So all in all Above & Beyond averages a 8.2 out of 10. Definitely the most accomplished Kal Jerico multi-parter thus far. Next we have the three-part Yolanda & Scabbs. I’ll be tackling this one all in one go. Thankfully the Omnissiah has been on my side this weekend. See you all again, either Monday or Friday.