Here’s where the story has a brief reprieve from being the adventures of the character named on the front cover. Scabbs and Yolanda is a three-parter spinoff. The title makes it quite obvious what this story will be about. Before I get into this multi-parter, this story will be graded as a whole. Unlike previous multi-parters I’ve graded on different parts of the story, I don’t feel the need here. The story is pretty straight forward; it could've even been squeezed into one whole lone part. But without any further delay, here it is...

While Kal’s away in Inquisition service, we’re left to ponder what Scabbs does. Kal, after all, is away for quite some time. It’s fair to assume it’s at the very least been a day or two. And the underhive doesn't wait on Kal Jerico.
The story starts with Scabbs having taken up a new bounty hunting accomplice – Hef (who looks stereotypically somewhere between a gay biker, a grizzled RAF pilot and an amputee). It becomes clear straight away that Scabbs is suffering from abandonment issues. Coping bitterly with Kal’s departure he’s trying to leave that part of his life behind. This has an odd human element to it.

Scabbs and Hef are searching the underhive for their bounties. Spying an outlaw camp ahead they sneak forward only to notice they’re all dead. Scabbs inspects the camp. The four upright-sitting corpses have been hosed with high quality ammunition. This may well be where Scabbs extensive knowledge is most prominent, as it leads him to conclude the ammunition is unique on Necromunda to house Catallus. As the words roll off his tongue he becomes uncomfortably aware of how much danger they may be in. Before he has ample time to warn Hef, he’s ripped apart by full-auto fire right infront of Scabb’s eyes.

As Scabbs attempts his escape, firing over one shoulder and losing the female silhouette pursuing him it feels like a good time to talk about the artist. Roman Sydor presides of the first two parts of Scabbs and Yolanda. This fresh blood is awfully similar to the styles Paul Davidson. This becomes most evident when the action begins, and suddenly the movement transitioning one frame to the other looks awkward and disjointed. Asides this, whatever strengths he has is pretty much equal to Paul Davidson’s.
The only real difference comes in as Scabbs thinks he’s escaped Yolanda only to run headlong into her in a scene which I suppose is meant to be funny, but falls short and delivers as only odd and out of place. It’s not that that caught my eye though – it’s Yolanda’s crazed look as she corners Scabbs. It’s truly freaky, speaking of the type of woman you wouldn't want to screw over (either one of two ways). 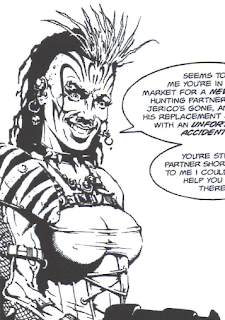 What comes next is a little out of the blue. Up until now Yolanda has always harboured a deep grudge to Kal Jerico. So does she eliminate his closest of companions, the one who recommended having her shot? No, she presents him with an offer to team up together. She’s bought off her bounty and purchased a bounty hunting licence, and all because she was bored of her old lifestyle. This is all very perplexing.
Could it be that all of this apparent hate of Kal Jerico is really her trying to hide an undying love of the man? Maybe teaming up with Scabbs by eliminating his new parter is the best way she has of hooking up with Kal. Talk about messed up and convoluted, but maybe that’s exactly what she is. Every time I scan a new page of this book to upload to this blog I see the covers of the three novels contained inside. The last of which, entitled Lasgun Wedding has Kal and someone who can only be Yolanda (surely?) ready to be engaged. I mean she has her facial marking, her aesthetic. The only difference is her bride’s dress. With that all in mind, maybe it isn't that bizarre of a twist. It does make me compare her to Helga from Hey Arnold though.

Onto part two and Scabbs is now assisting Helga in hunting her quarry – a ratskin renegade chieftain. His explanation as to how one should tackle different groups is quite tactical, again showing the brainier side of Scabbs. This doesn't stop him from acting the coward as soon as they notice him and charge. Neither does it stop Yolanda from acting the idiot when they charge.

I suppose she’s more of the atypical barbarian, which makes even more sense when she grabs Scabbs and charges right back at them. Which is... pretty bad-ass actually. The two battle their way to the centre of combat where Yolanda confirms their mark with Scabbs, ripping one of his leg to shreds in a hail of bullets. This leads to some wonderful panicked dialogue between Scabbs and a wonderfully certain response from Yolanda. Scabbs curses Kal Jerico again and the two escape the one way he’d warned Yolanda not to go.

They've run right into a ratskin burial ground. Yolanda, however, doesn't see the danger. This leads to some wonderful re-capping which raises a good point. Oddly, there are some striking similarities Kal and Yolanda have. More fodder for my earlier theory.
The ratskins have started a ghost dance chant. Despite Yolanda’s best scepticisms, it doesn't stop the ratskins summoning their ancestors in zombie form to do away with the intruders.

Part three changes hands, and now we’re confronted by the art of new-blood Richard Elson. All I have to say is that he has an annoying penchant for drawing everyone’s faces as if they were vampires from Buffy the Vampire Slayer. I dunno why he chose to do it that way, but it’s a really off-putting style!

Anyway, part three continues into the action. We’re delivered into Scabbs and Yolanda putting up a stand against the surrounding zombies, which Scabbs explains aren't regular zombies. This ain't no virus or regular run of zombies. Well, not for sci-fi anyway. These are re-animated by a different source. Ratskin magic. You can blow the head clean off one of these zombies and they’ll keep coming.
With the situation getting ever worse Yolanda does like Kal and makes her escape. She grapnels away with Scabbs and her quarry in tow. Things are almost looking up when one of the natives blasts her right through the shoulder, making her instinctively let go of the bounty. Being as hot-headed as she is, Yolanda jumps free of her escape and slaughters all contenders to her prize. All of that and with a knife no less! 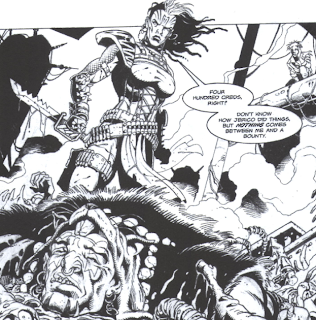 Postscript shows how this becomes a ratskin tale told in revered fear: “Yolanda, a terrifying angel of death trapped in human form”.

So straight to the point – Yolanda and Scabbs is 6.5 out of 10 in my opinion. It has some brilliant little bits, but for every great bit we have some entirely cheesy bits too. There are many parts that beg question that ultimately aren't answered and some parts are plain nonsensical. It’s fun in a Doomsday kinda way. We have some insight into the characters, but it feels the characters aren't really developed at all. There’s also an awkward transition between artists. The last shot of Scabbs and Yolanda in part two shows Scabbs in a position where he’s ready to start quailing at the impending zombie attack. It is therefore very, very hard for me to believe that he’s instantaneously recovered and started blasting away zombies with grim determination.

It’s still a fair and even in some parts good story, just not quite as good as I’d hoped. Next I’ll be covering Homecoming, and my least favourite of the Kal Jerico artists – Dylan Teague. See you Monday for that review.